Ferraris for All (Policy Press 2010 and paperback edition 2012) investigates the cultural aversion to prosperity that has become mainstream in western societies since the 1970s. Although relatively few say they are against economic growth outright many attack the idea of economic progress in indirect ways. These include claims that it damages the environment, the argument that it causes widening inequality and the observation that wealth does not bring happiness. Ferraris for All argues such criticisms are misplaced. Prosperity is certainly not everything, nobody claims it is, but the abolition of scarcity on a global scale is a pre-condition for human flourishing. 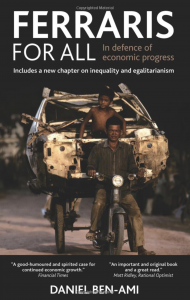 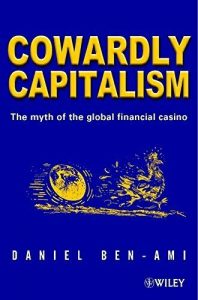 My book on global finance, Cowardly Capitalism (Wiley, 2001), argues that the financial markets are characterised by risk aversion rather than the aggressive risk taking generally assumed. Although it was published over two decades ago it still helps provide a foundation for developing a critique of the way in which the more recent financial crises are generally understood. It was widely reviewed including by the Financial Times, the Frankfurter Allgemeine Zeitung and the Independent. 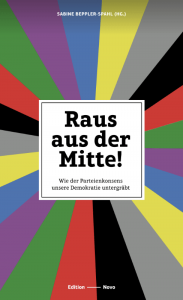 I have contributed chapters to several books. These include “Der Lockdown und die Einsamkeit” (The lockdown and loneliness) in a special edition of Novo, a German publication published in 2021; a chapter on London’s financial services to London After Recession Ashgate 2012) and a chapter on “Is Japan different?” to Cultural Differences, Media Memories (Cassell, 1997). The latter was reprinted in Modern Japanese Culture and Society  (Routledge, 2007), a collection edited by DP Martinez.