Ed Husain’s Among the Mosques explores our diverse and divided Muslim communities.

This review first appeared in spiked. 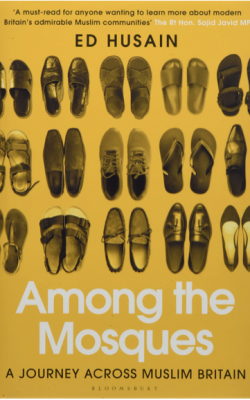 Ed Husain’s Among the Mosques provides an illuminating portrait of Muslim Britain.

Husain does not focus on Islam as a religion or Islamic theology although, along the way, he sheds some light on both. Nor is he primarily investigating political Islam or jihadism, although he provides some some insights into those, too.

Instead, Among the Mosques is focused on the different Muslim communities living across Britain. These are divided by language, nationality and religious conviction. In addition to English, there are native speakers of Arabic, Bengali, Farsi, Punjabi, Turkish, Urdu and many other tongues. Britain’s Muslims originate from Africa, the Middle East, the Indian sub-continent and countless other places, too. Taken together there are over three million Muslims in Britain today (according to 2016 figures). And given the high birth rate among Muslims, that number is expected to increase dramatically.

Ed Husain’s own diverse experience makes him well qualified as a guide to these different communities. He was born into a devout Muslim family, following the Sufi tradition, in east London. As a child he won prizes for his recitation of the Koran. Then, aged 16, he joined an Islamic fundamentalist group for five years (an experience recounted in his 2007 book The Islamist). However, after several years living in the Arab world he returned to Britain where he founded an anti-extremism think tank and became an adviser to former prime minister Tony Blair. However, Husain is not a party-political figure. David Cameron, another former prime minister, is also thanked in the acknowledgements. Husain completed a doctorate at the University of Buckingham under the late Roger Scruton, one of Britain’s sharpest conservative thinkers.

Husain’s current mission is to reconcile Britain’s liberal historical tradition with his humanist reading of Islam. He is both a devout Muslim and an adherent of great British philosophers such as Edmund Burke, David Hume, John Locke, John Stuart Mill and Adam Smith. He even argues that ‘the British legal system, with its fundamental values of individual liberty and freedom of expression, is a perfect working model of the main aspects of the sharia, applied to the context of modern life’. Husain is a staunch supporter of both gender equality and LGBT rights.

In his view the Muslim literalists, such as the Dobandis and the Salafis, misinterpret Islam. For example, they take certain hadith (the sayings or customs of the prophet Muhammad) out of context. They also fail to recognise a liberal tradition in Islam which was, among other things, influenced by the Ancient Greeks and made great advances in understanding astronomy.

Among the Mosques is organised according to the British towns and cities Husain visited in the course of writing the book. These include, among others, Dewsbury, Blackburn, Birmingham, Belfast and London. In each place he talks to Muslim religious leaders, congregants and taxi drivers. He also seeks out the impressions of non-Muslims on local Muslim communities.

On his journey around Britain he comes across both literalist and more liberal adherents of Islam. The literalists are often all too willing to separate themselves from mainstream British life. For example, their religious marriages are often not registered with the civil authorities. On the other hand, he also meets Muslims with a liberal take on gender equality and gay rights.

However, towards the end of Among the Mosques, Husain reaches a sober conclusion. He concludes that it is the literalists who have gained the upper hand:

‘After travelling the length and breadth of Great Britain, meeting Muslims from every denomination, it is clear to me that blind reliance on scripture and the clerics is overwhelmingly strong within British Islam. Adherence to the seventh-century Koran, ninth-century hadith and 10th- and 11th-century Islamic scholarship is deeply embedded.’

He feels that three distinct trends are at work among Britain’s Muslim communities. First, communalism, whereby what might have been a private, religious identity is becoming increasingly public and political. Second, clericalism, in which the power of clerics is subverting the authority of the state. And finally, caliphism, which encourages Muslims to believe that secular Britain is flawed and failing.

However, Husain ends by rightly pointing out that it is wrong to put all the blame for this state of affairs on Britain’s Muslims. Mainstream British society must also bear responsibility for failing to inspire British Muslims. After all, earlier generations of Muslim migrants were much more motivated by Britain’s national story.

As Husain puts it:

‘A fuzzy “integration” whose success is judged by Muslims speaking English, baking cakes and playing cricket will not work. Caliphists are only successful in winning followers for their imagined utopia of an “Islamic State” because the majority community is unable to tell a more compelling story of why Muslims should have a stake in maintaining Britain as a pluralistic, tolerant, secular democracy.’

As Husain shows, coming up with a more compelling national story remains one of the chief challenges facing Britain today.

Israel is no Goliath